From despondency and drudgery to being a proud goatherd - Archana 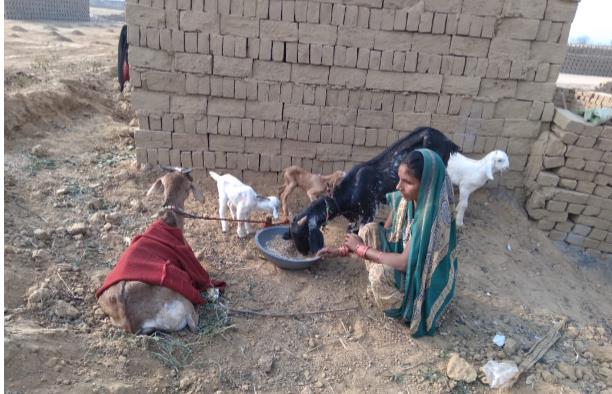 Archana is 32 years old. A bubbling, energetic child, she was stricken with the dreaded smallpox when she was 10. And became blind; thereby starting a life of despondency and lack of joy.

Soon, she was married off - education is not yet a real option for rural blind girls - and started bearing children: she currently has four daughters and a son and got sucked into the deadly cycle of poverty. Her husband is a daily wage earner, at best an erratic profession in the village. When we reached her during our survey, as usual, we were greeted with scepticism and horror stories of NGOs having charged them 100 or 200 rupees and promising a lot but delivering nothing. We learnt that she did have the benefit of the Disability pension, though no other benefits.

We invoked success stories from neighbouring villages for her husband and her to believe in us. After much persuasion, the husband agreed to enrol his wife in our Training programme. Archana is a deep thinking lady and expressed concern on how to educate her children so that they did not end up as manual labourers. This became our motivational point that if she were to earn money, she could educate her children.

Initially she was unable to focus on her training, remaining in her state of despondency brought about by poverty and absence of any opportunities for economic growth. However, the persistence of our field staff resulted in sparking her interest as she learnt to thread a needle, light a fire and do some elementary cooking. This ignited her enthusiasm and she would always await her trainer, full of questions about difficulties faced during the previous day.

A love for animals and pride in owning them is a constant feature in Indian villagers. So too with Archana. We facilitate the purchase of three goats, which she happily tends to throughout the day. "I will sell the offspring and save the money to buy a buffalo!" The pride of most villagers...