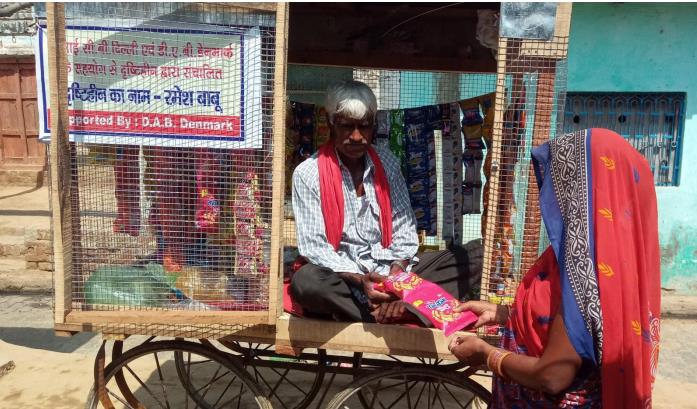 Ramesh Babu has been blind for almost half a century. Now 57, he lost his sight when he was 8, afflicted as he was, by smallpox. However, he was married with a large family of eight, an aged mother, a wife and five children, all young. His wife cooked and tended the family, doubling up as the bread earner through her meagre earnings as a daily wage labourer. Ramesh Babu was not willing to talk to us complaining, as many do, that NGOs come and promise a lot but deliver nothing. He complained that earlier he had a bus pass which was now not accepted since it had been replaced by a Disability ID Card, which had been promised but never delivered. We cited our success stories from adjoining villages to him and eventually he heard us out.

We discovered that even though very poor, he had a good social standing, possibly due to his caring for his aged mother and his wife's diligence at providing for the family. We motivated him to join our training programme. He proved to be a diligent learner, often ahead of his training! He was delighted when we taught him and he successfully shaved himself. He learnt recognising and identifying currency notes and coins. He was overjoyed when he learnt to light incense sticks and so perform the daily prayer rituals by himself.

At the same time, we facilitated the making of his Disability ID card and applied for his Disability Pension and educated him about the various schemes of the government. "You are different. You deliver," he thanked us. "You have given a new direction and dimension to my life."

He decided to open a mobile petty shop. It looks like this, as shown in the picture. The shop is encased in an expanded metal wire mesh mounted on a cart. He sits atop/ inside and his wife pushes the cart to its location, wherever decided for the day! Innovation indeed. Our follow up reveals that he has daily sales of between Rs. 500-700 with savings of Rs. 100-150. He plans to add a line of cosmetic products to his shop. I have received a new direction in my life. Indeed!